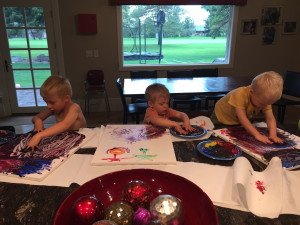 This year I wanted Mother’s Day to have a little creative flair and give the grandmas something other than my go-to gift of framed photos of the kids. Inspiration (or was it Pinterestspiration?) hit me on a recent trip to an art store. I bought some large white canvases and finger-paints and reveled a bit in my outside the (5×7) box idea.

Here was my vision.

Set up the three boys at the counter with the canvases and paints. After a few minutes, rotate the boards among the boys so that each painting had contributions from all of the grandsons. Voila! Beautiful homemade masterpieces made with love.

A few hours later, I saddled the boys up to the counter and explained the plan. Wide-eyed and strangely calm, they sat and watched me place six paint colors onto paper plate palettes. I gave them each a plate and said we would rotate paintings in a few minutes.

Remind me again of that saying about the best laid plans…

Of course the boys did exactly what I should have known they’d do. Exactly.

I watched my little Picassos dig in and as they did so, all the visions of handprints, stick figures, and flowers dancing in my head abruptly stopped.

In eerie synchronicity, all three boys put both of their hands down and mixed the colors together on both the plates and their palms, creating a putrid shade of brown with a tinge of purple. Seconds later, and giggling wildly, they slapped their hands all over the white canvases, which quickly transformed into the same lovely shade of prown.

Stop, I cried. I tried to rotate. I tried to wipe them down and start anew with fresh palettes, but the prown just became prowner. Their laughs became louder and the game became more fun. Once the canvases were filled they turned their sights (and hands) on the kitchen counter and then each other, coating their elbows, forearms, and eventually their hair and faces.

Wide-eyed and not so calm, I halted the exhibition. One by one, I lifted each child up under the armpits, held him in the air, and carried him to the shower.

I sighed one of those “oh man” kind of sighs. Despite good intentions, this adventure had turned into quite the epic fail, a prown epic fail.

Three bathed children, two rolls of paper towels, and a bottle of 409 later, I resolved to head to the frame store the next morning.

But when that next morning came, a remarkable thing happened.

I went out into the kitchen, walked past the paintings, and stopped. I picked up each canvas, tilted my head to the side, and just stared.

And right then it occurred to me why this was the perfect Mother’s Day gift.

In those paintings I saw a smattering of colors. I saw fire (red) and joy (yellow) and softness (blue). I saw growth (green) and wisdom (purple). I saw enthusiasm (orange) and innocence (white).

I saw fingerprints belonging to three one-of-a-kind kids who had chosen me for their mom.

I saw smudges and drips and smears. I saw mess-ups and uncertainty and failed expectations.

But I also saw laughter and happiness and togetherness. I saw a whole lot of love.

And that’s exactly what motherhood is.

It’s full of clutter and noise.

Sometimes there are epic fails.

Sometimes it feels like one big shade of prown.

But just like in the paintings, there is more to motherhood than meets the eye. And underneath the mess, there is something undeniably lovely and perfect.

There is a beautiful smattering of colors and qualities. There are smudges of mistakes, but also sparkles of joy. And woven in the fabric below is a whole lot of love.

Underneath that mess is a once blank canvas forever changed with little hands and hearts.

So on this Mother’s Day, I want to celebrate the brilliant beauty that exists in the messes.

May we always remember to take time to look for it.