Yesterday was one of those icky days. The kind when you wake up and right off the bat you’re wishing for a redo. Nothing even close to catastrophic happened, just a bunch of little things in a row that had me on a warpath by noon.

I woke up early and picked up the family room, took greater than usual care to vacuum, fluff and arrange the pillows on the sofa, fold and lay the afghans and pick up and put away the toys, books and thousands of itty bitty pieces of plastic.

I left the room for no more than two minutes (to go to the bathroom; of course it always happens when I go to the bathroom), and my hooligans had destroyed every single last bit of my handiwork. They pulled every cushion, pillow and blanket off the couch to make a huge pile in the middle of the floor and were standing on the couch frame hurling the aforementioned itty bitty pieces of plastic at each other…and then at me.

After dropping one of the three monkeys at the bus stop, I headed to the gym with the other two. I was rejected at the door of the Kids’ Club for “alleged” (aka “We don’t want to deal with your kids”) reasons.

Trying to salvage the morning, we headed to the park.

Have you ever tried to use a porta-potty with 2x two-year-olds? I’ll just leave it at that.

Next we drove to the pharmacy drive-thru to pick up a prescription. When told I had to wait for an hour, I said this: “Why are you being so rude to me? Do you know I have two screaming children in here?” Then I followed it up with a dramatic entrance into the store and onto a soapbox (twins in tow, yet still able to make spirited hand gestures) and an “I. Would. Like. To. Speak. To. A. Manager. I. Will. Be. Taking. My. Prescriptions. Elsewhere.” Wow. Someone call Broadway.

I came home, fed the kids the $15 worth of food I bought in the Starbucks drive thru (thank God for drive thrus) because I was so exasperated from this no good day and the thought of swiping peanut butter seemed like way too much. Although, truth be told, that Starbucks grilled cheese is pretty out of this world.

Three poop diapers, two water fights atop our kitchen island and one thankfully unsuccessful attempt to actually SWING from a light fixture, I put the ruffians down for a nap and went about trying to recreate the picturesque family room, sighing and wah wah-ing along the way.

And then my mom sent me this photo of herself: 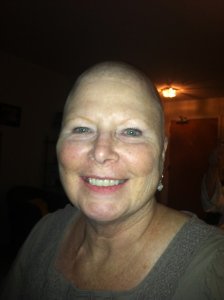 My brave and fierce mama began her fifth round of chemo last week. She was already losing her hair and decided to take the bull by the horns, shave her head and meet the inevitable with courage and dignity.

She was bald, she was smiling and she was beautiful.

God bless my sweet mama. She feels so bad but then has the grace to apologize for complaining about it. She’s the one person who truly knows what a truly bad day is because she’s had more than her fair share. She stares it right in the face and says: “Is this all you got?” Then she shaves her head and goes out for Italian food to celebrate.

Isn’t it crazy how a little perspective can come at the exact moment when we need it most?

Of course, this is not to say that we aren’t due our fair share of bad days. Or that our problems aren’t problems or that our mini tragedies aren’t tragic. Because they are. We can’t always compare and minimize our lot because there’s always someone with a trump card. And sometimes we just need to give ourselves a little room for a little self-pity and have ourselves a little wah wah.

But every once in a while, it helps to get a little gut check. Sometimes we need a little “in the grand scheme of things” reminder that a messy house, a missed workout and a little extra wait time aren’t really the fixings of a bad day.

And maybe a little poop isn’t so bad when we think about someone else who might have a whole lot more crap on her hands.