My son is a builder. He loves forts, he loves Legos, he loves construction sites and he loves the game Jenga. 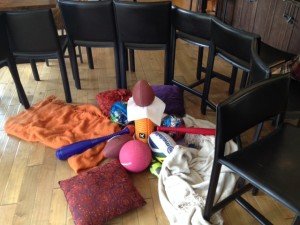 The other day he built this rocket in our kitchen. He carefully hauled in items from other rooms and assembled them into this missile. Although at first glance it may appear to be just a pile of blankets and balls, upon further review true artistry is revealed.

He worked on this masterpiece with the kind of precision, patience and thoughtfulness sure to impress both his Mom and Michelangelo. Every article was delicately placed, considered and confirmed with angst and a furrowed brow. And the working conditions were less than ideal with distractions including a meandering pug and some bulldozer twins.

Not only did my little rocket scientist construct this impressive warhead but he also overcame the important hurdle of “How to Protect the Rocket from The Brothers.” He wisely included a semicircle of chairs to prevent entry and the hope that entry would not be attempted on the unprotected side (unprotected due to (a) a lack of chairs and (b) a lack of faith in The Brothers’ aptitudes).

He was so proud.

And I was so proud to see him so proud and to see him delight in his own imagination and dedication to seeing something to completion.

It was a really sweet moment in which all of those wonderful characteristics that one yearns to see in a child—creativity, independence, diligence, pride, spirit—all converge together in one invaluable memory.

It was a really sweet moment in which I had a tiny window to his future and a little assurance that he’ll carry those same tools with him for the more important building opportunities down the road.