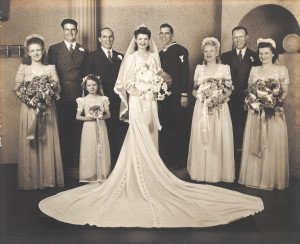 It was a time when a loaf of bread cost 10 cents and a gallon of gas cost 15 cents. The average cost of a new house was $3,450 and an average year’s wages was $2,400. In Britain, the Education Act lifted the ban on teachers being able to marry. The St. Louis Cardinals won the World Series. Jimmy Page and Danny Devito were born. And Bing Crosby was atop the music charts with “Swinging on A Star.”

They celebrate three children, five grandchildren and four great grandchildren. Their marriage spans thirteen presidents and thirty-five Olympic games. They lived through war and, thankfully, a return home from war. They witnessed the advent of the microwave, Velcro, Tupperware, the Frisbee, the credit card, Mr. Potato Head, Barbie, the pacemaker, post-it notes, cell phones, the ATM and the IPod.

Today I celebrate their incredible journey, their story and their commitment.

I thank them for always leading and living by example and for honoring me with a small role in their legacy.

And I thank them for giving me perspective. Because in the span of such a marriage, in the span of such a life, the small windows of time that seem like forever when you are on the inside (a tough job, kids in diapers, the teenage years, the old house) are truly but a tiny fraction of the whole. When you are trudging through the mud it may feel as if your circumstances eclipse all time, as if you can’t remember a time before or envision a time after. But this story proves, that even if you can’t always see it, there really is a forest for the trees.

And it is beautiful.

Today we raise a glass to celebrate these two sweethearts. And thank them for having and holding all of these many, many years. 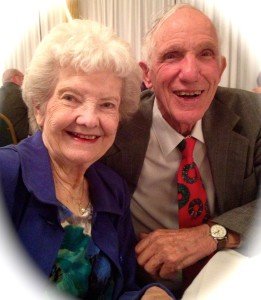