In keeping with tradition, our five year old has once again designed his dream March Madness bracket with all of his favorite teams.  The NCAA might have to start regulating superpowers and probably institute fouls for temper tantrums…but there’s no denying this tournament would make for exciting TV. 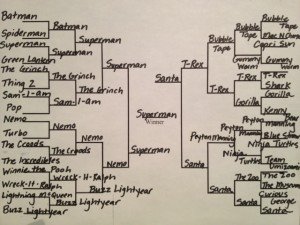 The SSC (Superheroes and Seuss Conference) has some serious contenders this year. Superman should be flying straight and easy to the Final Four, but look for The Grinch to give Superman a few rips in his cape. The Grinch could steal Christmas and Superman’s spot in the Final Four. Possible upsets? Sam-I-Am might end up Sam-I-Am-A-Winner. And Pop has shown amazing tenacity throughout the season in what some say was the toughest schedule of all teams in the tournament. Despite the constant belly hopping, Pop is still going strong.

In the ORC (Oscar Rejects Conference), the favorites are Nemo and Wreck It Ralph. But Winnie the Pooh could definitely give Ralph a run for his money. And honey. Preferably honey. And there are a couple of high risk/high reward gambles here. Turbo’s super speed would have landed him a higher rank, but his low free throw accuracy slows him down to snail pace, hence the #8 seed. Buzz Lightyear’s peak physical condition makes him a potential threat but his tendency to fly away mid-game to Infinity (and sometimes Beyond, depending on the time zone) makes it hard to bet on him.

The RRC (Really Random Conference) has some key teams to beat, including last year’s defending champ, T-Rex. T-Rex has a tough trail to blaze with Gorilla in the trees and Shark in the water. He’ll have to get past both of them, which is no easy task. But T-Rex’s staying power is undeniable, despite his teeny tiny arms. Kenny Bear has a huge upside but can sometimes run into problems getting bogged down with details (as in every item of clothing he is wearing, every item of food he ate that morning and every item for school he carries around in his backpack). Bubble Tape can definitely hit the long shots but sometimes fails to stick it in the paint. No doubt we’ll definitely hear some of the all-familiar “Hubba Bubba Hubba Bubba!” chants. And who doesn’t love a good Cinderella story? This year’s heartstrings are being pulled by Gummy Worm. Everyone thought Gummy Worm was out when he injured his bottom red 1/3 in January. But he is back and stronger than ever and might just surprise us.

Lastly we have the WNC (Willy Nilly Conference) with newcomer Peyton Manning. It’s his first Dance and he’s coming off a stellar season with a 31-1 record, although that one loss to Seattle in February was a heartbreaker. Peyton should break down Blue Straw easy in the first round but after that, it’s no man’s land. Hope he brings his helmet because he’s going to need it to fight off the winner of the Ninja Turtles/Team Umizoomi matchup. A lot of ladies might be rooting for Umizoomi as the one team with some girl power in this male dominated field. But the Ninja Turtles have some serious weaponry in their arsenal if Donatello can stay healthy. The Zoo and The Museum game is anyone’s guess, while Santa should sleigh #7 seed Curious George with Ho-Ho-NO problem and even have time for cookies and milk.

There’s sure to be more than one shining moment this year.