You know you’re having a bad day when even the I-Pad man poops his pants. 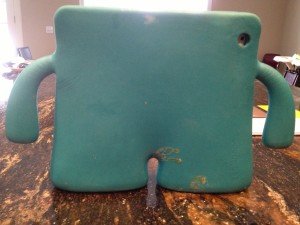 It’s been a pretty crappy week.

And when I say crappy, I mean, literally, crappy.

One of the highlights (or lowlights) of the week was collecting and dropping off a stool sample from one of the twins.

If you haven’t ever had a chance to experience this supreme parenting moment, be thankful. Though I do believe it should be designated a right of passage right up there with potty training and teaching how to ride a bike.

My favorite part was checking the boxes on the label:

Formed? Sort of. Loose? Well, yes, at least the parts that weren’t formed. Soft? Yes. Minus the raisins. Watery? Hard to say. Doesn’t water make something soft and loose?

I then proceeded to carry around the three vial sample (in a Ziploc, of course, because I’ve been screwed by a screw top one too many times) in my purse all day, fearful that the sun’s hot rays into my car might compromise all of my hard work. I had a little chuckle every time I reached into my purse for a handful of jellybeans (in another Ziploc, of course). What a glamorous life.

However, this crappy story doesn’t even come close to what I like to call my Zenith of Crappiness.

Cover your noses because this is gross.

One of the twins had one of those insane blowouts, the kind that even after an entire box of wipes, the subject is still covered in a nasty dark yellow film. I managed to get him into the bath with the other twin right on my heels and curious as to what he can be jealous of that minute. #1 remained siting calmly in bath and the nasty film slowly began to disperse. #2 decided he wanted to get in the bath too and started to crawl in fully dressed. I managed to catch him inches above the water, strip down his pjs and hold him over the water (and his brother sitting below). I was about ready to dip him down too but as I took off the diaper, his brother was showered with an even better blowout. Such a one-upper.

I stood there, surveyed these two babies, sitting in this poop “bath,” and heavily considered the better alternative of taking them out to the swampy gutter at the end of our driveway to clean up instead.

But they sat there, stared up at me, and howled with laughter.

And I laughed back. Because at that point, what else can you do?

It’s been a pretty crappy week.

But I’ve learned there’s a little bit of laughter and humility that comes along with the crap.

Happiness in the crappiness.

A little messy and hard to find, and you’ll probably get your hands dirty. But it’s there. Trust me.