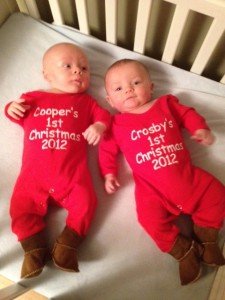 Sleigh bells ring, are you listening,
In the lane, snow is glistening
A beautiful sight,
We’re happy tonight.
Walking in a winter wonderland. 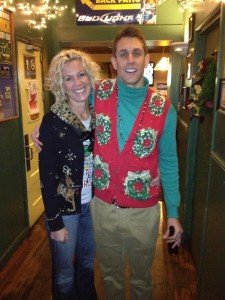 Ugly Sweaters and Twelve Bars of Christmas.
Yikes to both.

We had such a wonderful Christmas with our family and friends. Despite some reports from Sparkle to the contrary, Cal was a very good boy and was rewarded quite heartily by Santa. 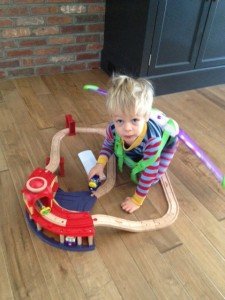 And three boys equal Legos. Lots of Legos. So begins the Era of The Plastic. 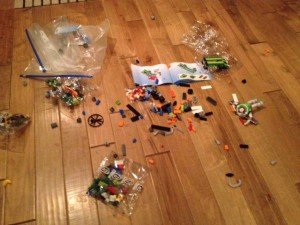 Legos. And Tiny Buzz joining in the fun.

And the giving just continued when Cal paid it forward by knighting his younger brothers. 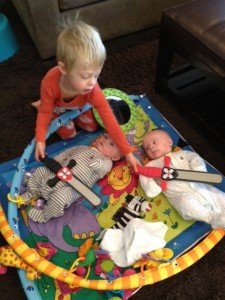 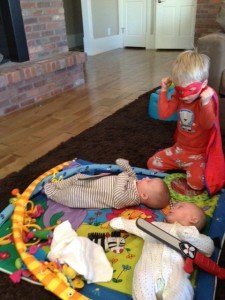 I am Super Cal. Pick up your swords and fight! Grrr!

We were blessed this year with a White Christmas. The snow started on Christmas Eve and we woke up to a beautiful scene on Christmas morning. 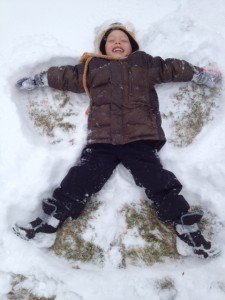 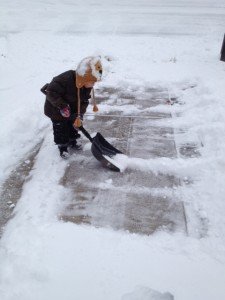 The babies have been doing great. They are loving life and smiling more and more every day. Cooper has mastered tummy time and is close to rolling over. Crosby, on the other hand, simply likes to admire his brother’s hard work. 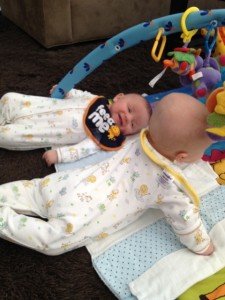 We are getting closer and closer but still no cigar. Coop Van Winkle is sleeping just about 7-7, but Cros (CROS!) is still a fan of stargazing around 3 or 4am every day. We’re looking for an 8-hour stretch with no peeps and Cros still likes to let us know he’s down the hall. Really there’s no need for a monitor in our house but I just like to make sure Ted joins in the fun too. One for all, all for one.
Crosby IS making it about 5-6 hours, so we’re definitely moving in a forward direction. And my dark circles are starting to wane. 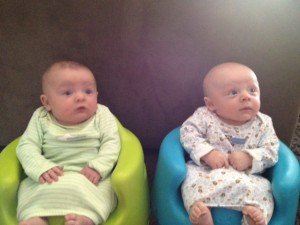 Never too early for a little Nick Jr. in our gowns

So while the work may be exponential, the rewards are as well.

Cal is ever the better big brother and took his job quite seriously yesterday when I asked him to keep an eye on Crosby while I changed my clothes. 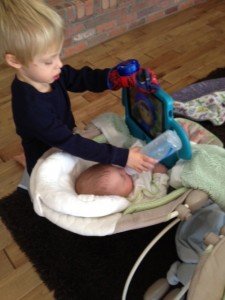 Notice his Spidey glove. Part of his costume that he has not taken off for 4 days. The costume itself has holes and food splattered all over it, so he did relinquish that for a quick run through the wash. 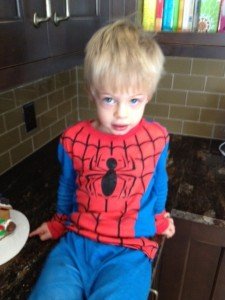 Cal had an extra special ski day with Dad this week too. They went up to A-Basin for the first ski day of the season. Cal amazes me. It was 3 degrees at the top of the mountain (without factoring in the wind chill) and he was having the time of his life going through the trees and powder. He is NOT his Mother’s child. Kudos to Ted for crouching down and holding onto him for 4 hours (as Cal hasn’t quite mastered the snow plow or how to slow down and certainly not how to stop). Tough kiddo AND tough Dad.

Cal’s fearlessness (although it will bring me a lifetime of anxiety) is one of his greatest strengths and one of my favorite things about him. And if his Dad has anything to say about it, Cal will be skiing the back bowls of Vail by Spring. 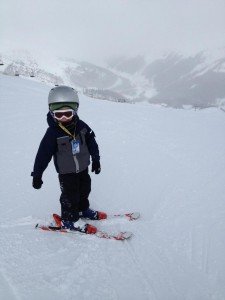 Cal at the top of A-Basin. 3 little degrees

Cal and I were reading on Christmas Eve a little book with the manger story. Cal pointed to the baby and said, “that’s Baby Jesus.” He also pointed out Mary and “Josess” but asked “where the big guy was.” I asked, “do you mean God?” He said “yes, God. God told Mary to not be afraid.”

Wise words from my own little wise man. Be not afraid. We have so very much to be thankful for and a new year of hope and joy ahead of us.